Celtic are one of a number of clubs who have ‘expressed their interest’ in signing Adam Maher, reports Saturday’s edition of De Telegraaf.

Despite having no permanent manager in place at Celtic Park, with Neil Lennon awaiting his fate, the Scottish Premiership club are continuing their transfer business.

The 25 year old midfielder is out of contract with AZ, and whilst there’s been the possibility of continuing with the Dutch club for at least another season, it’s explained he’s instead planning for a transfer and wants to make the most of his free status.

Celtic stand pretty well against the opposition. Fener are linked with almost every free signing in Europe, the Championship clubs didn’t have great seasons and promotion looks a struggle, and Brescia have just been promoted from Serie B so their budget and chances of survival will both be under question.

Maher only signed a one year contract with AZ, having left Twente at the end of his contract. He’d also joined Twente on a free from PSV. 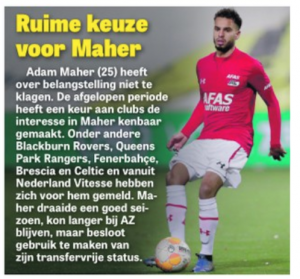 Celtic would have to be aware this is a player seemingly looking for short term contracts, at his last two clubs anyway.

Highly rated as a youngster, PSV paid around £6m for him in 2013, a big deal for the club back then. Things didn’t work out quite as well as they’d hoped.

The Celtic target has also been a Netherlands international, although his last appearance was in 2013.