Kylian Mbappé was linked with a move away from Paris Saint-Germain last summer, but a move never took shape and he is still at Parc des Princes.

Real Madrid have long been credited with an interest in the 23-year-old and Liverpool are also added to his suitors list.

Last January, we relayed news from Spain that Jürguen Klopp is an admirer of the forward and the German has maintained regular contact with him and his entourage.

Mbappé’s contract expires in June and he can leave PSG as a free agent, if they fail to tie down their star to a new deal. He scored the winner in his side’s 1-0 win over Real Madrid in the first leg of the Champions League round of 16 tie.

Last Thursday, Sport reported the latest defeat in the European competition has ‘changed the scenario drastically’ for Carlo Ancelotti’s side to sign the PSG star. The report also stated the attacker is ready to ‘listen to Liverpool’.

Another report from Sport on Monday explains that Liverpool, who ‘were in the running’ to sign Mbappé, ‘have disappeared from the map’. 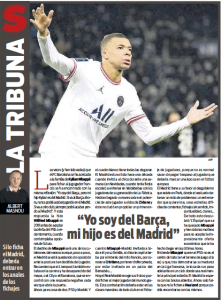 Barcelona and Manchester City were given a ‘negative response, every time they opened the door’ for his signing over the years.

With Klopp’s side disappearing from the transfer race, the Madrid club are ‘running out of opposition’, due to the player’s ‘determined position’.

It’s now down to Ancelotti’s side and PSG [to retain Mbappé beyond this season], with Sport making it clear that Real Madrid have ‘everything to win’ this battle.