Liverpool have been credited with an interest in Paris Saint-Germain star Kylian Mbappé in the past and are again dragged into the mix now, this time by Spanish newspaper Sport.

The forward’s current deal runs down in June and Real Madrid, who failed to sign him last summer, have long been touted as his likely destination.

He scored in PSG’s 1-0 win over the La Liga side in the first leg of the Champions League round of 16 tie, and the report states this fixture has ‘changed the scenario radically’.

The France international’s environment ‘assures’ they have ‘not signed anything’ with Los Blancos. They ‘open the door’ to continue in Paris or ‘listen to Liverpool, a club that attracts Mbappé a lot’.

Mauricio Pochettino’s man wanted to solve his future soon and joining the Spanish giants was his clear choice. 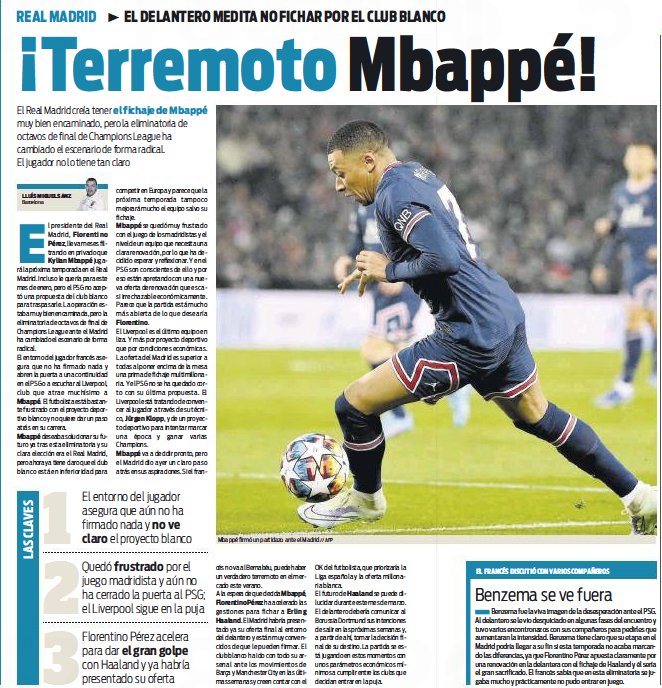 However, after the latest tie, he is ‘now clear’ Real Madrid are ‘inferior to compete’ in Europe and believes his signing will not help them change that a lot. Therefore, the former AS Monaco man has ‘decided to wait and reflect’.

This has seen PSG press with an ‘almost irrefutable’ renewal offer. The Reds are in the picture, but are ‘last in the running’. The newspaper suggests the Merseyside club cannot compete financially with either Carlo Ancelotti’s side or the Ligue 1 side.

Liverpool, however, are ‘trying to convince’ the attacker through their manager, Jürgen Klopp, and also by offering an interesting sporting project.

The Frenchman is ‘going to decide soon’ on his future. Real Madrid took a ‘step back’ after losing to PSG, while Liverpool are ‘still in the bidding’ for him.

Sport add that if Mbappé doesn’t end up in Madrid, ‘there may be a real earthquake in the market this summer’.