Schalke decided against exercising the option to make Jean-Clair Todibo’s loan deal permanent because of the financial impact caused by the Covid-19 crisis.

Barcelona’s idea is to cash in from the defender’s sale this summer, and they have to find a solution for him.

Everton have been regularly discussed as an option, and Leicester City have now joined the chase, according to Sport.

Three days ago, the same newspaper explained the Blaugrana do not want to ‘wait any longer’ to sanction the 20-year-old’s transfer.

Saturday’s edition of the Catalan outlet claims the La Liga club ‘have been talking’ to Carlo Ancelotti’s side for weeks.

AS Roma have been discussed as another firm suitor, but the report adds the Serie A side are out of the race to sign the Frenchman. 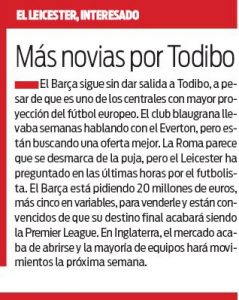 The Foxes get a mention and Sport state Brendan Rodgers’ side have ‘asked’ about the centre-back in the last few hours.

Barca are looking for €20m plus €5m in bonuses for Todibo.

With Everton and Leicester discussed as the two suitors, Sport say the Blaugrana are ‘convinced’ the former Toulouse player will end up in the Premier League this summer.

However, right now it feels a case of them trying to sell him, rather than clubs actively chasing the purchase