Jérémie Boga joined Chelsea’s youth system in 2009 and progressed through the club’s ranks without making it in the first team. He went on the customary loans, to Rennes, Granada and Birmingham City, and then really started to build his career when he joined Sassuolo in 2018.

That was a permanent move, although Chelsea kept a buyback option of around €15m. At one point it was thought the Blues would use this, if only to then sell the player on for a quick profit, however, over the summer it was reported they’d decided against it.

Instead, Chelsea would look to get themselves a percentage of the fee when Sassuolo finally come around to parting ways with the 23-year-old midfielder. He has a contract with the Italian club lasting until June 2022, so unless they get a renewal the Serie A club will have to seriously consider a sale in the next summer window.

Since returning from a spell out after a positive Covid-19 test, Boga has played 343 minutes in the league so far this season, adding a goal and an assist in that time.

Sassuolo are currently sitting third in Serie A and that’s brought more attention to their players, including Boga. 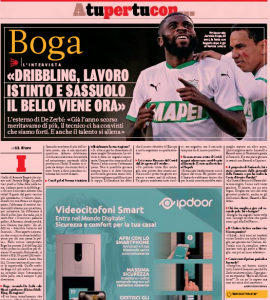 thinks Chelsea will regret parting ways, to which he responded: “Who knows… At 12 I moved near London with the whole family to play for Chelsea. At the beginning it was not easy, I had left all my friends in Marseille, but then I adapted.”

If they’ve secured a sell-on fee, Chelsea will still have a better chance than others of signing Boga, if they decide to bring the player back.