Home Europe Despite club being ‘out of sync’, Everton player twice as good as...
SHARE

PSG may well be top of Ligue 1, but their 25 points after 12 matches shows things are going quite as smoothly as they often do for the French champions.

L’Equipe describe the club as being ‘out of sync’.

They drew 2-2 with Bordeaux on Saturday, and the Paris side’s second goal came from Moise Kean, who is very much impressing on his loan spell from Everton.

Not for the first time, L’Equipe rated Kean as the best PSG player on the pitch, giving him 7/10. In comparison, superstar Kylian Mbappe, the Everton man’s partner upfront, was given just 3/10.

To underline Kean’s impact since he arrived in France, he’s the first player to score in his initial three matches at the Parc des Princes since Dely Valdes in 1995.

The 18-year-old now has six goals and one assist since beginning his loan from Everton, and has a good chance of keeping Mauro Icardi, who is returning from injury, out of Thomas Tuchel’s side.

This is all something of a bright note for Everton, who aren’t having the best of periods right now. 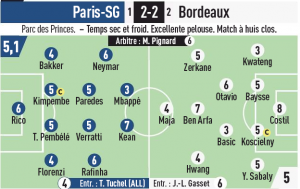 Attempting to recall Kean in January is unlikely for Carlo Ancelotti’s side, but given PSG don’t have a buying option there’s a pot of gold building for the end of the season, should the Toffees decide to sell.