If you’re going to have a great match in La Liga, then Real Madrid are as good a club as any to do it against.

Joel Robles managed it at the weekend, as Real Betis, struggling so far this season, managed a 0-0 draw at the Bernabeu.

Ahead of next weekend’s big derby against Seville, it was a good step forward, and Joel was one of the major reasons.

Leaving Everton last summer when his contract was allowed to expire, the 29 year old found himself without a club. Betis saw the opportunity, as they worried about a potential Pau Lopez exit.

Had Pau not then gone to AS Roma, it’s possible Joel would have found his opportunities nearly as restricted as they’d been at Everton.

With the former Tottenham player gone, Joel had his big chance, however, he then picked 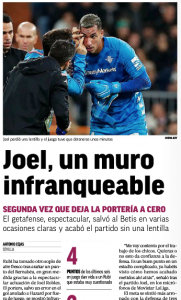 up a red card in his first match. That meant he missed the Barcelona game, but Dani Martin conceded five goals so Joel wasn’t set to be discarded fresh from his Everton move.

Now a regular, Marca say the goalkeeper was ‘an impassable wall’ against Real Madrid.

Parts of his performance have been described as ‘spectacular’ and he wasn’t even distracted by losing a contact lens during the match.