Good news for Hull City, who have been interested in signing Marvin Zeegelaar from Sporting. According to A Bola, the player has just rejected an offer from Alavés and continues seeking a move.

As the offer included an obligatory buying option at the end of the season, the Dutchman wanted a pay raise to make the move, something that didn’t happen.

Zeegelaar’s departure from the Lisbon side is hoped to be imminent, the left-back has two more days to find a new club. Otherwise he’ll spend a season without playing, since he’s been training separately. 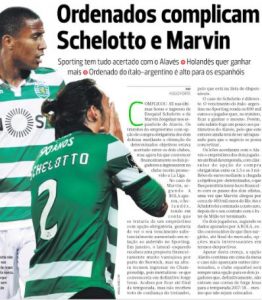 O Jogo also covers the news, and says that England is now a likely possibility. That’s why Hull City, who have been recently linked to the player, should now have a bigger chance.

The buying option for Alavés was only €2.5m, something obviously affordable for the Championship club.

And a big salary seems to be a great argument to convince Zeegelaar to join.

Hull City have a good chance with this one, if they remain keen.