Surprising the footballing world by agreeing to join Tigres in Mexico at the age of 28, Florian Thauvin decided to get paid, at least for the time being.

We say that because La Provence on Wednesday report that one of the stipulations in his contract with the Mexican side is a clause allowing him a ‘change of scenery’ at the end of every season, ‘just in case’.

A smart decision, considering plenty of other clubs, including both Crystal Palace and Leicester City, were interested in his services.

In fact, the two Premier League clubs are named by the local newspaper, with it stated Thauvin ‘had offers’ from the Eagles, which is well known, but also ‘especially Leicester’. 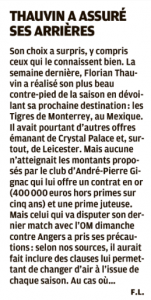 It wasn’t a secret that the Foxes were interested in Thauvin, with Brendan Rodgers’ desire to work with the forward reported a number of times, but the fact an actual offer was made seems like fresh information.

The clause could be good news for Leicester, as there’s every chance the Frenchman could return to Europe after just one season abroad with his old teammate André-Pierre Gignac.

You know, just to clear his head, enjoy a new culture, only to return to these shores for the prime years of his career.