With the contractual situation of Leo Østigard cleared up by Sport Witness, we know the Norwegian has a deal with Brighton & Hove Albion until 2023.

That’s why Napoli are having to negotiate a fee with the Seagulls to try and get a deal over the line, and while the requested numbers aren’t astronomical, the Serie A side are proving reluctant to pay.

This is what Corriere dello Sport on Monday are reporting, explaining the 23-year-old has a ‘not bad physique’ for what the Italians are looking for, with a ‘particular predilection for Fabio Cannavaro’. 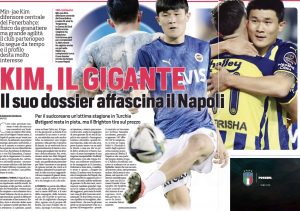 That being said, he is seen as an option that ‘will be valid if Brighton lower their claims’.

It’s even pointed out ‘the figures are not substantial’, but neither club wants ‘to give up a few million euros’, whether it be from the buying side or the selling one.

With Østigard excelling at Genoa on loan during the second half of the season, Brighton have every right to ask for more money, since they know he’s developed, but it remains to be seen whether this is a hill they are willing to die on or not.