Fenerbahce president Ali Koc has stated his club will sign at least four new players before the end of the transfer window.

Koc revealed they are looking to bring a striker, central defender and a defensive midfielder, and claimed they’re in talks to do so. 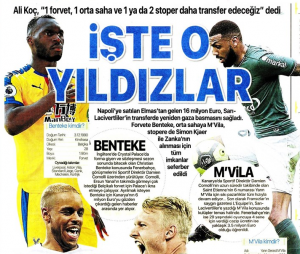 According to Fanatik, Fenerbahce are ready to offer €6m to Crystal Palace, and are hopeful of a relatively quick deal.

Benteke didn’t enjoy the best of seasons with Palace last year due to injuries and poor form and he could make a fresh start elsewhere.

However, given what the Eagles paid for the Benteke a few seasons ago it seems unlikely they would sell for such a fee.