Raúl Jiménez has not featured for Wolverhampton Wanderers since he fractured his skull against Arsenal in November.

The void caused by the Mexican’s absence forced Wolves to act in the winter market and they did so by taking Willian José on loan from Real Sociedad.

Willian has managed only one goal in 16 league appearances and that came in his side’s 1-0 victory over Sheffield United last month.

Mundo Deportivo state the 29-year-old ‘lived another black day’ in Wolves’ defeat to Everton and it has been the norm since he arrived at the club in January.

The La Liga side allowed the Brazilian to join Nuno Espírito Santo’s side, hoping that it was a ‘one-way trip’.

When his loan deal was agreed between two clubs, a clause was included that forced Wolves to pay a ‘compensatory amount’, if the Premier League side don’t make the frontman’s stay permanent. 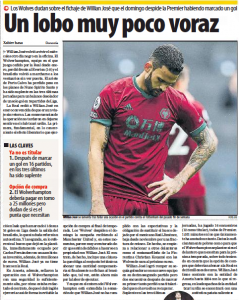 La Real were of the belief this clause would see the English club ‘almost inevitably exercise the purchase option’ at the end of this season. However, they now fear the Molineux side are not in favour of retaining the South American.

Wolves feel it’s ‘risky’ to exercise this option and are now ‘more for the work’ of paying the penalty to not make Willian’s stay permanent.

Therefore, the player will have to return to Anoeta, even though he is not included in Real Sociedad’s plans next season.