Earlier this week, Mundo Deportivo reported Neto has decided to leave Barcelona and a move to Arsenal remains a possibility.

Friday’s edition of Sport explains Everton are ‘interested in taking’ the goalkeeper this summer.

He arrived at the Camp Nou in 2019, as part of the deal that saw Jasper Cillessen join Valencia.

Neto, who is a backup for Marc-André ter Stegen, has made 10 appearances in all competitions this campaign.

The newspaper states it’s an ‘open secret’ the keeper will ‘not continue’ with the La Liga side after this season. Barring any last minute surprises, the weekend clash against Eibar will be his last match for the Catalan club.

Everton are ‘interested’ in acquiring his services and the Blaugrana ‘want to ask’ €16m to sell him.

Barca paid €26m plus €9m in variables for the Brazilian two years ago and the fee was expected to be paid over the duration of his contract [until 2023].

This summer, the Spanish giants will have finished paying half of the fee and can finish 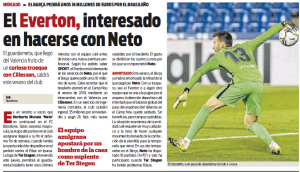 the remaining half through Neto’s sale to Everton or any other club. ‘No profit, but no loss either’, states Sport.

With all three parties interested in doing business this summer, a deal is there to be concluded for Carlo Ancelotti’s side.