With each new edition of Spanish sport newspapers, Barcelona’s transfer summer seems to get more complicated.

When it comes to goalkeepers at the Catalan club, the general theme has been selling Neto, working out a new back-up option, likely for cheaper than the Brazilian is sold for, and then continuing with Marc-Andre ter Stegen between the sticks.

The German goalkeeper has been one of the positive aspects of Barcelona in recent years, and letting him leave wouldn’t go down well with many supporters. Nevertheless, AS approach that possibility today.

They say Mino Raiola, described as a ‘great friend of Laporta’, has offered Gianluigi Donnarumma to Barcelona for a summer transfer. According to the report, he can leave AC Milan for free if they don’t qualify for the Champions League, with everything coming down to the last day for the Rossoneri. 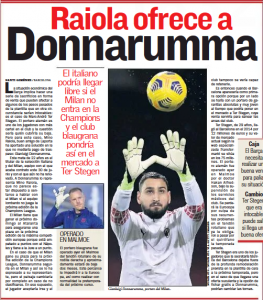 Signing Donnarumma as a free agent would then see Barcelona able to make cash by selling Ter Stegen.

That would certainly be a controversial turn of events for Blaugrana president Joan Laporta.