One of the big stories over the past week or so has been the one surrounding the future of Achraf Hakimi.

Sold to Inter last year, the Morocco international was key to Inter’s success in the league, but he has since become the sacrificial lamb at San Siro as the Serie A side look to bring some money in to balance the books.

This opened the door for clubs like Chelsea and Paris Saint-Germain to try and sign a player they didn’t feel was previously attainable, and a battle kicked off.

For a while, the rich Ligue 1 runners-up looked to have the upper hand, but Gazzetta dello Sport on Thursday reveal it now might be advantage Marina Granovskaia and co.

They state that the ‘novelty, if anything, is that Chelsea have slightly outperformed Paris Saint-Germain’, who were the first to offer around €60m.

However, Inter want around €20m, but are open for those to be in bonuses, and the Blues, ‘have chosen Hakimi as their first international reinforcement for next season’.

With that in mind, ‘the expressions of interest are growing’, especially ‘because the expected Parisian relaunch has not yet arrived’.

While there is ‘no deadline’ as to when this needs to be done by, ‘the feeling is it will not last that long’, with a timeframe of two weeks mentioned by Gazzetta. 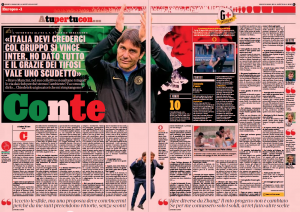 Chelsea’s plan is to ‘try and entice Inter with a series of players to be included in the negotiation’, which included the likes of Emerson Palmieri and Davide Zappacosta, as well as Andreas Christensen.

Despite this, ‘Inter don’t seem interested in counterparts’, with their main mission to bring in actual money, rather than bigger wages.

Emerson could still be transferred to Inter, but that is seen as a negotiation ‘that would be conducted separately at a later date’, and ‘preferably with the loan formula’.

That’s why ‘on these assumptions, it is possible that a London counter-offer will arrive soon, all made up of cash’.

Time for Chelsea to dig deep.