Loaned to Milan for the season, Diogo Dalot impressed enough for Milan to want to give him a second chance next year.

The Manchester United defender was very useful to Stefano Pioli thanks to his versatility, but there appeared to be some reluctance coming out of Carrington, at least initially, to get a new deal done with the Serie A side.

Now, however, things have changed a bit, and there seems to be a bit more wiggle room for Milan, as Gazzetta dello Sport make it clear ‘doors reopened’ for a deal involving Dalot.

It’s stated that despite both the Portuguese defender and Brahim Díaz initially arriving on dry loans, those in charge at San Siro ‘never lost hope of obtaining their redemption’, or at least renewing their loans.

Both Paolo Maldini and Federico Massara have been working ‘in the shadows’ to try and unblock the two situations, and when it comes to Manchester United, ‘the initial coldness gave way to a possible attitude’.

While ‘there are no price talks yet’, the staff at the Old Trafford cannot ignore that Dalot ‘wants to continue his growth’ with the Serie A side.

The issue now is that it ‘will be necessary to see what price will be fixed for the new bond’, as Gazzetta wonder whether it’ll be a option to buy, or simply a compulsory one. 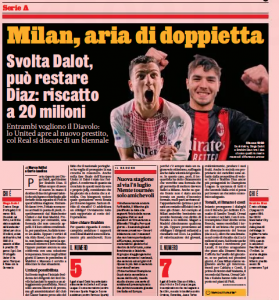 Calciomercato, on the other hand, reckon Milan have made their ‘first offer’ to Manchester United for Dalot, and it’s a loan with a view to buy.

However, the Red Devils would rather a loan with a compulsory purchase clause, which the Italians currently have ‘no intention’ of doing.

That being said, Manchester United ‘could accept a discount on the initial €18m demands’, with an offer of €16m + €2m in bonuses potentially enough to close the deal.

The bottom line, however, is that the Premier League club will only let him go if it’s for good, whether it’s in a straight up transfer or a loan with the compulsory option to buy.

Milan now know what they need to do if they want to keep Dalot.