Home Europe Barcelona ‘will comply with Koeman’s requests’ – 4 signings and majority of...
SHARE

Sport has a headline on Friday reading ‘Three ‘low cost’ signings and one star’ and details how Barcelona want to back their manager in the summer market.

There’s a firm decision to allow Ronald Koeman to continue for at least another season, with it being thought the manager has shown enough so far for it to be clear that he deserves to be in charge for another campaign.

On top of that, the club are ready to back him, with new president Joan Laporta wanting to continue the theme of optimism which has been around the club since his election.

Of the four planned signings, three would be on free transfers. Eric Garcia moving from Manchester City, and signing a five year deal, is thought to be as good as done.

Georginio Wijnaldum and Memphis Depay are ‘very advanced’, according to the report, and the fourth signing, which would be the ‘star’, is Erling Haaland.

The Borussia Dortmund player’s value is estimated at €150m, and Barcelona will face a battle with other top clubs to sign him. 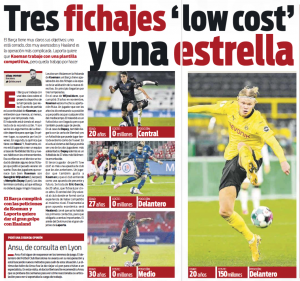 It’s worth noting that Sport have been a little excitable this week. Reports at the beginning of the week dismissed an agreed deal for the Liverpool midfielder and there’s even been doubts whether Barcelona truly need him.

On top of that, signing Depay and Haaland has been doubted elsewhere, with it being stated it would be a case of one or the other.