For the past week or so, the Catalan media have repeatedly stated Barcelona have plans to make one big signing in the summer.

Borussia Dortmund striker Erling Haaland is one of the main targets for the La Liga side and they want to sign the Norwegian to strengthen their strike force next season.

The Argentina international was the main target for the Catalan club last summer, but his high release clause made his signing difficult.

It’s again highlighted in today’s report there were ‘intense negotiations’ for the 23-year-old’s transfer in 2020, when the Camp Nou side and the striker reached an agreement in principle.

According to the newspaper, Ronald Koeman’s side have ‘reactivated their interest’ in the Nerazzurri star and his possible arrival is ‘seen with good eyes’ by everyone at the club.

The Blaugrana have maintained regular contact with the South American, but this time, he isn’t as ‘receptive’ as he was the first time.

Martínez’s camp are of the belief Barca didn’t do everything to get the deal over the line last summer and this caused the player some issues at Inter.

It’s ‘nothing that can’t be resolved’ because the attacker is ‘absolutely convinced’ the next step in his career is to move to the Camp Nou.

The possibility of signing Antonio Conte’s man increases if Lionel Messi ends up signing an extension.

The ‘optimism is moderate’ at Barcelona, but Inter’s financial conditions play in the 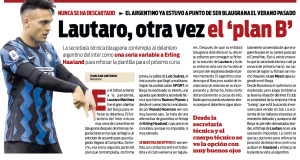 favour of Koeman’s side. The Spanish giants, who are also facing economic issues, feel it won’t be an ‘impossible operation’ to sign Martínez in the next market.

It’s worth noting that Martínez is ‘Plan B’ for Barcelona and that is likely to be activated if they cannot sign Haaland.