The Denmark international has a release clause of €18m and it was also explained Leganés weren’t willing to negotiate.

Wednesday’s edition of Sport now claims Setién convinced technical secretary Eric Abidal to sign a versatile forward instead of bringing in a recognised No 9. This has been decisive in Barca preferring the ex-Middlesbrough man over other targets.

The newspaper once again explains Leganés haven’t changed their stance and therefore, the Spanish champions are left with no choice but to pay the 28-year-old’s release clause.

Barca’s plan is to deposit €18m to La Liga to be able to officially complete Braithwaite’s transfer. Their intention is to complete the deal as soon as possible and the payment could be made today or, at the latest, tomorrow.

Abidal and his assistant Ramon Planes met with Braithwaite’s agent Ali Dursun in Barcelona on Tuesday. 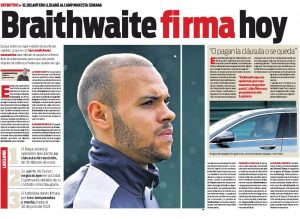 During the meeting, they finished specifying the details of a three-and-a-half year contract.

Sport adds Barca will look at Braithwaite’s performances and then assess his continuity at the Camp Nou.

Star ‘will be a Liverpool player’ – Reds have presented ‘formal...

Newcastle warned ‘monstrous economic power’ might not be enough to get...