There’s been all kinds of claims about Arsenal and Lucas Torreira over the past 24 hours, with the deal seeming to go from one of rough interest to being agreed in about four quick steps, with a lot of it being hot air.

The old social media links, and alleged recent follows have become ‘a thing’. But it’s the same story as usual, Torreira does follow Arsenal and Ozil on Instagram (and the latter on Twitter too) but he’s not necessarily followed them recently.

Arsenal fans looking at his followed list see those two first because Instagram shows mutual follows before others.

Anyway, back to reality.

Despite that, they say Arsenal have come in ‘strong’ on the Sampdoria player. It’s now not only Napoli fighting to sign him. 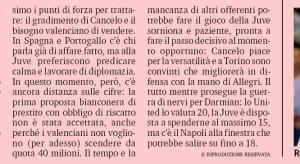 Napoli’s transfer business is all over the place at the minute, with both transfers in and out stalling, and countless players being linked.

Arsenal could take advantage of that.