Corriere dello Sport’s Saturday edition has a take on West Ham’s ‘blitz’ to try and sign Felipe Anderson from Lazio.

The Hammers ‘do not give up’ and have instead ‘raised the stakes’ in their pursuit to sign the Brazilian. Corriere dello Sport report the Premier League club have now secured a meeting with Lazio’s tough president Claudio Lotito.

A meeting will be held some time next week in Rome, where representatives from West Ham will meet ‘the leaders of Lazio’. But it’s explained that the economic gap between the two clubs remains so great that generally negotiations have frozen.

The get together is to work out ‘if the conditions exist’ for a deal to de done, or if everyone should give up and move on. Chelsea interest is referenced but it’s not clear how serious that really is and whether the club have been brought in to add a little more drama. 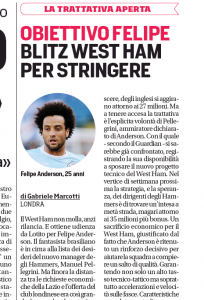 Lazio believe their player is worth €45m or more, but would be ready to consider a deal of €40m plus a further €5m in bonuses.

However, it’s stated West Ham’s stance is currently around the €27m mark.