Home Championship Nottingham Forest can get transfer after ‘ambitious project’ attracts, next step is...
SHARE

Nottingham Forest’s double deal from Benfica rumbles on in the Portuguese media, and it all continues to sound positive for the Championship side.

Saturday’s edition of Record reports Diogo Gonçalves and João Carvalho will ‘travel soon’ to complete their moves to the club, and that follows updates from Friday which stated the timeline of a transfer has been brought forward.

The two youngsters have been convinced by the ‘ambitious project’ at Nottingham Forest, and also by the prospect of getting more time on the pitch. 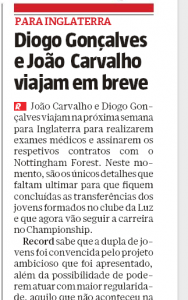 Next week will see the medicals for both players, report Record, and also the contracts being signed.

Once again, it’s stated in Portugal that Nottingham Forest will be paying €15m for João Carvalho on a straight transfer, and have a buying option on Diogo Gonçalves after an initial season long loan deal.

The next step for both players is getting on the plane.