Since the 30th of June, when Wolverhampton Wanderers’ option to buy Vitinha from Porto expired, the Portuguese media has been wondering if there’s still a chance that the Premier League side would make the signing.

Reports from the local press said Wolves didn’t have the money to trigger the €20m clause in time, and asked the Dragons to hold that price for a few more weeks so they could stick to the plan.

And according to Jornal de Notícias today, that’s exactly what will happen. The newspaper says Wolverhampton will complete the purchase in this transfer window and for that same amount.

They say Vitinha is signing a contract of ‘four or five’ years with the Molineux side, now with the hope that Bruno Lage will give him more minutes than Nuno Espírito Santo did. 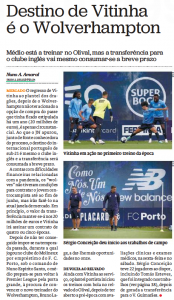 Vitinha not only returned to Portugal but has been training with Porto since the start of the week, as for now, he belongs to the Dragons and has a contract running until 2024.

According to recent reports, the Portuguese side are expected to ask UEFA to register his sale as a move from the 2020/21 season just so they can have a better record for Financial Fair Play.

In his season on loan at Wolves, the midfielder only managed to make 22 appearances.