West Ham United’s reported offer for Sevilla forward Youssef En-Nesyri is genuine, but the Spanish side are holding out for a higher price for the player.

That’s according to Estadio Deportivo, ABC Sevilla and Diario de Sevilla, who all provide their own takes on West Ham’s interest today.

Reports in England yesterday stated that the Hammers had made a move for the Sevilla forward, with David Moyes keen to add a striker to his squad after selling Sebastien Haller to Ajax.

En-Nesyri is the man they are apparently looking at, and they have seen a bid of €30m plus rejected by the La Liga side.

The belief is that they will return with a better offer before the end of the window, but that is likely to be given short shrift by Sevilla according to the Spanish press.

Diario say that those in charge of the club rejected West Ham’s first bid as they believed it to be low and feel that €30m is ‘far below’ what the player is worth.

They are ‘certain’ that it will not be the only offer they receive for him as he has the perfect ‘conditions’ to be a success in the Premier League and as such are willing to wait for bigger and better offers in the future.

Estadio back this up somewhat but offer a little more hope to the Hammers by naming a price that Sevilla may be tempted at.

They say that Monchi has made it known to West Ham that their offer isn’t good enough but what they haven’t stated is that a deal categorically won’t happen. 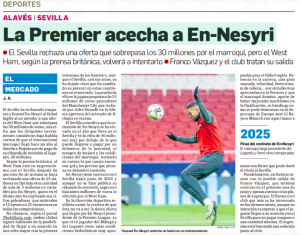 To the contrary, the ‘conversations’ between the two clubs continue, and while some at the Spanish club understand he has massive potential, there are those, like Monchi, who see the financial aspect of the deal in the current climate.

Those people believe that a capital gain of almost €20m for a player they signed for €18m last summer would not be a bad deal in the slightest.

At the moment nobody is daring to put a price on the player, but Estadio believe that an offer of €35m plus variables could get West Ham their man, especially considering Sevilla budgeted for sales worth €43m this year and need a big exit to meet that.

The bigger problem may be convincing the player, with ABC reporting that he has told Sevilla’s management that it is ‘not his intention’ to leave for West Ham at this moment in time. They say that West Ham have told him, via his agent, that they are willing to double his current salary, but he does not believe now is a good time to start a new experience and would prefer to stay in Spain.

That, though, may end up out of his hands with two weeks of the window left and the possibility that ‘anything can happen’ according to the newspaper.