On August 8th, we covered a report from Mundo Deportivo, who claimed Barcelona’s Andre Gomes was the subject of a game of chicken between West Ham and the Catalan club.

This was because the Hammers wanted to take the Portuguese international on a loan deal with the view to buy. However, the La Liga winners opreferred to offload the midfielder.

Thursday’s edition of Sport has a story about the 25-year-old with a headline ‘André Gomes points to West Ham…’. The report from the Catalan newspaper mentions the Premier League club are ‘best positioned’ to complete the signing of the former Benfica man.

The talks between the two clubs are underway, but the negotiations are ‘taking place against the clock’ because the transfer window in England will close today.

Sport doesn’t claim whether it will be a loan deal or a permanent transfer in their report, but mentions rumours of West Ham offering Domingos Quina to Barcelona as a part of the deal to sign the player.

Gomes also has an offer from his former club Valencia and is now waiting to find out how the negotiations will progress. 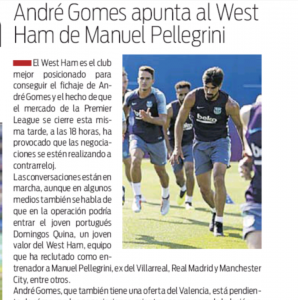 Sport suggests his future could be resolved today.