In recent days it’s been widely reported in the Turkish media Fenerbahce will make an attempt to sign Mario Balotelli on a free transfer this summer.

The Italian striker will become a free agent when his contract with Marseille expires next month, and this appeals to the financially struggling Super Lig club.

However, Fotomac report the Turkish side will face competition for Balotelli’s signature with West Ham United said to be interested in the player.

West Ham boss Manuel Pellegrini could be in the market for a forward in this transfer window due to the uncertainty of the futures of Javier Hernandez and Andy Carroll with the Hammers.

It’s claimed Marseille are also considering making a renewal offer to the 28 year old but Fenerbahce are hoping to land the player by offering him a better financial package than the French club and West Ham. 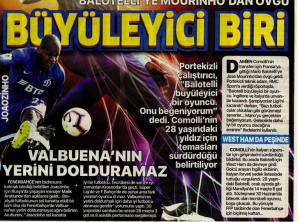