Enjoying himself out on loan at Udinese, Ken Sema isn’t that interested in returning to Watford.

He’s said so in past interviews, and there was a feeling that the Pozzo family could leave him there, aware of his desires and allowing the Hornets to make some cash in the process.

What they might not have anticipated, however, is the interest from another club, as Fiorentina are also keen on the Sweden international.

The Serie A side are looking to bolster the left-hand side of their team, and while they have Cristian Biraghi set to return from his loan from Inter, they also have an interest in Sema. 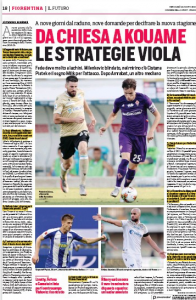 It’s Corriere dello Sport bringing the information, who explain the versatile winger has landed ‘in the sights’ of Fiorentina, intrigued by his ability to play multiple positions.

There’s no more detail than that, but it could be the Pozzo family jump at the opportunity, as this will be cash from neither of their clubs’ bank accounts, but from an outside source.

That’s always welcome, especially if the player isn’t interested in playing in the Championship, and they have to plan around that.