Unlike Watford, the other Pozzo club, Udinese in Serie A, managed to avoid relegation by finishing 13th.

One of the key contributors to that achievement was Ken Sema, loaned from Vicarage Road for the season, and who is set to return at the end of August.

However, there’s a good chance that doesn’t happen, since the Sweden international has made it clear in past interviews that he’s happy in Udine, where he has earned the trust of Luca Gotti.

Gazzetta dello Sport look at the club’s situation on Friday, explaining it is ‘not improbable’ that the winger’s stay at the Serie A side is ‘confirmed’. 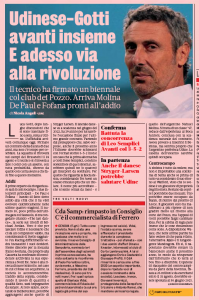 ‘First of all’, however, he is likely to return to Watford, perhaps for the Pozzo to have an assessment of their assets before deciding the manner in which they’ll divide them up.

The Hornets’ relegation is likely to cause an exodus this summer, with many of the players looking elsewhere to find top league football rather than staying in the Championship, and it seems Sema could be one of them.