He first missed the Champions League game against Steaua Bucharest due to a shoulder injury, and now, after complaining about pain in his leg, he should be left out of tomorrow’s league game against Vitória de Guimarães as well.

This is the club’s official reason for his absence, as reported by Record on Thursday, but Correio da Manhã has a different version of things on Friday.

The newspaper claims William has actually been refusing to train because of his discontent with the way club president Bruno de Carvalho has been handling negotiations with West Ham. 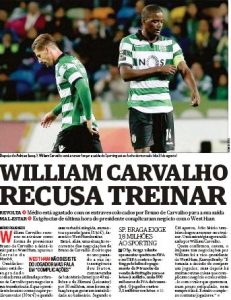 It’s claimed that the president first demanded €30m, and then changed it to €35m, making West Ham hesitate,.

That’s a situation that happened before with João Mario, who according to the newspaper, refused to train and ended up leaving Sporting for Inter Milan for a club record fee of €40m last summer.

That’s how much Sporting were asking for, and if the Hammers agree the additional bonuses and payment methods, the transfer is likely to be closer now.