About a week ago, there were a handful of rather big stories in France coming from multiple sources claiming that Tanguy Ndombélé had told José Mourinho he wanted out of Tottenham.

It all stemmed from the fact the French midfielder no longer wanted to work under the Portuguese manager, with the two parties struggling to sort out their differences, as the relationship was described as broken.

Since then, Mourinho has tried to calm down the situation a bit, letting the media know he felt Ndombélé still had a future at Spurs, but L’Equipe on Monday don’t think that’s the case.

They explain the two have ‘yet to renew contact’, and it’s ‘radio silence’ for the Tottenham manager.

Left on the bench for the 2-0 win over West Ham before playing a mere 19 minutes against Sheffield United in that 3-1 loss, the Frenchman now has to wait and see if he’ll be called up for Monday’s game against Everton.

With all this in mind, Daniel Levy has reportedly jumped into action personally, speaking with Ndombélé’s representatives, as he feels the player ‘can reverse the situation and install himself as a leader in the group’. 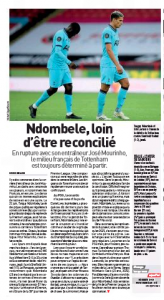 The second message he passed along was discussing the midfielder’s future was ‘out of the question until the end of the Premier League’.

Down his end, Ndombélé’s stance remains the same, as he feels ‘the trust is broken’.

As for exit routes, ‘exchanges with Barcelona are regular’, but the door leading to Paris Saint-Germain ‘has yet to open’.

While Tuchel feels like Ndombélé would be a good signing, Leonardo, their technical director, ‘has other priorities’, like Lazio’s Sergej Milinković-Savić.