The issue surrounds the future of Tanguy Ndombélé, who has outright told José Mourinho he no longer wants to play under him.

We covered the original claims, which emerged via TF1 journalist Julien Maynard, earlier on Wednesday, but L’Equipe have a more in depth look at the situation and give us some detail.

It’s explained the clash between player and manager took place on Monday night and revolved around the player’s form, as Ndombélé feels at 100% of his capacities, while Mourinho believes he ‘isn’t showing enough investment’.

This has led to the France international sitting on the bench for both games against Manchester United and West Ham without coming on.

Ndombélé joined Tottenham after ‘listening to Mauricio Pochettino for many hours’, which led to him choosing the move to Spurs, but this ‘missed restart’ has been the straw that broke the camel’s back. 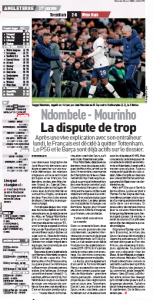 He’s told Mourinho as much, ‘already fed up with his public criticisms over the past few months’, and the midfielder feel the trust ‘is completely broken’.

It’s said ‘both parties have spoken a lot over the past few hours to find a solution’, but a ‘reconciliation’ looks difficult for the time being.

Two clubs are keen on Ndombélé, as both Paris Saint-Germain and Barcelona have ‘concretely positioned themselves’ regarding a transfer.

It’s revealed talks are underway between the Spanish side and Spurs, and while Daniel Levy won’t ‘roll over’ for what was a €60m investment, he’s ‘conscious of the almost irreversible relationship break’ between Mourinho and Ndombélé, meaning he ‘would be ready to find a solution’.

That’s when a two-year loan with an automatic view to buy is mentioned, and the idea of such a creative deal has ‘thickened’ over the past few hours.

We’ll have to see if Paris Saint-Germain can catch up with the Catalans, but it seems to be advantage Barcelona right now, and with three different sources reporting the argument between player and manager, it’s safe to believe it actually happened.