In the past couple of months covering the rumours about Wilmar Barrios from Boca Juniors, we’ve seen Tottenham Hotspur, Everton and Fulham all being heavily linked to the player, each one in a different story.

Today it’s Spurs who are said to be leading the race. The rumour comes from Hoy En La Noticia, saying the Colombian international is being ‘chased’ by the Premier League side.

The outlet says that Tottenham would be willing to pay the player’s US$16m (€13.7m) release clause.

This information comes out as a warning for Boca Juniors, who have been working on a new contract for the player, which will put his tag price up. 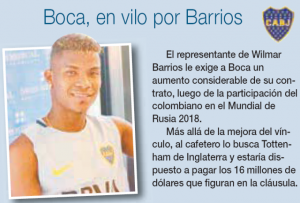 But even if a new contract is agreed, the release clause’s increase wouldn’t be that big. A report from Olé this week claimed that Boca Juniors intention was to change it to US$20m (€17.2m).

So it looks like the difficulty to get Barrios now is more about winning the race against the other Premier League clubs than paying Boca Juniors.

Arsenal player has ‘made it known’ he wants exit – Gunners...