Fulham are reportedly the latest Premier League club to join the race for the Boca Juniors midfielder Wilmar Barrios.

It’s Argentine newspaper Olé who reveals it today, saying the Cottagers have recently made an enquiry about the player’s situation.

Olé’s story is about the many approaches the player has been getting, and Boca Juniors’ fear of losing him for a low amount.

The newspaper actually reveals that the price for Barrios is lower than expected. They say he currently has a release clause of US$16m (€13.7m), while other reports have claimed it was €18m. 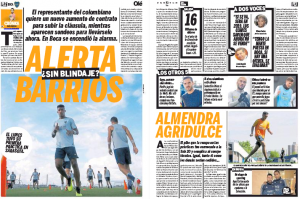 It’s been a while since Boca Juniors started negotiating to give the player a new contract, although the release clause wouldn’t change much.

With Everton and Tottenham already being linked to Barrios, Fulham’s entrance in the race only makes this rumour more interesting.