With just 20 days left in the transfer window, time is ticking for clubs to get rid of what fans see as ’deadwood’.

Arsenal have a few players like that, including a certain Spanish striker named Lucas Perez, who spent last season on loan at Deportivo La Coruña.

Now back with the Gunners, there have been a few rumours sending the 29-year-old around Europe, and one is slowly picking up pace in Italy, with a transfer to Serie A touted.

At least, that’s how Corriere dello Sport see it on Friday, dedicating a large chunk of their Lazio section to the Spaniard, who so happens to share the same agent as Luis Alberto, already in Rome. 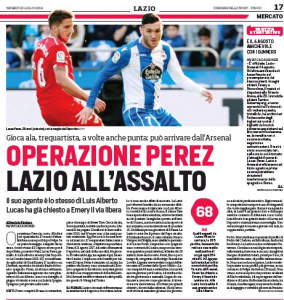 With the two sides set to face each other in a friendly on August 4th, discussions can take place relatively smoothly as they prepare for the game.

Lazio are described as able to ‘launch the assault anytime soon’, as Perez ‘dreams’ of ‘playing once more with Luis Alberto’, having previously done so at Deportivo during the 2015-16 season.

However, the price could be an issue, as the Italian side have little interest in spending €15m on a soon to be 30-year-old, meaning Arsenal would need to lower their demands and potentially make a loss if they want this transfer to happen and get Perez off their wage bill.

With Lazio edging ever closer to Atalanta’s Papu Gomez, it could be the Serie A side start thinking about other ways of spending their money.