The Danish media continue to run with the idea that Chelsea are interested in Kasper Schmeichel. It may have only been reported a little in England, but that’s all it takes for excitement to build.

Denmark are rightly very proud of their national goalkeeper and whilst he’s achieved a lot at Leicester City, some in the media would like him to be move to what they believe is a much bigger club.

Schmeichel had a really good World Cup and that’s helped raise his profile even more and is likely to at least partly be behind the recent transfer links.

Danish newspaper BT has spoken to a man who knows the player well, national team manager Åge Hareide, and asked him about the goalkeeper and Chelsea rumours.

Hareide was unwilling to speak directly about a possible move, so instead talked the footballer up as one of the best goalkeepers in the world: “He is in the top three. He was perhaps the best goalkeeper at the World Cup. He has also shown earlier, especially in that season when Leicester won the Premier League that he is at the top. So I want to say that Kasper is in the top three. 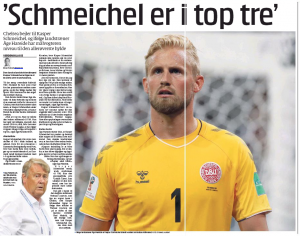 “Kasper’s attitude is getting better every single time. That’s why he gets better and better. I think he could be even better. He has also gained a lot of experience gradually and he always works hard.”