In a twist we didn’t see coming, Tottenham Hotspur are allegedly interested in an ex-Premier League winger.

That man is Gerard Deulofeu, who has already shown what he can do in England’s top flight at both Everton and Watford in the past.

He’s since gone to Italy, where he has enjoyed a resurgence with Udinese, and that has attracted attention from bigger clubs, including, it seems, Tottenham.

This comes from Corriere dello Sport, who primarily focus on the fact Napoli want the Spaniard, who recently admitted he has a ‘lot of respect’ for the Serie A side. 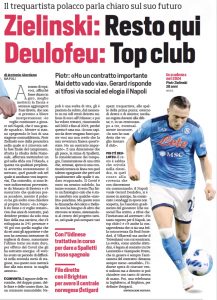 That being said, ‘there is also the awareness that there is good competition’, which is when Tottenham are mentioned, alongside Real Sociedad and Villarreal.

Udinese, down their end, ‘hope to make €20m, but at €18m it can be closed completely with a handshake’.

That’s an affordable fee for a club like Tottenham, who would be getting a player who has just come off a 13-goal season, with five assists, totalling 35 appearances in all competitions.