Spurs, along with West Ham United, Napoli, RB Leipzig and Benfica get a mention in today’s edition of Record.

The Portuguese side wanted the centre-back in January, but their offer was €5m short of the €20m demanded by the Bundesliga club.

Talks between the 23-year-old and Benfica have continued since then, but the economic crisis due to Covid-19 makes it difficult to complete his transfer.

It’s claimed the Eagles’ financial department have warned president Luís Filipe Vieira ‘not to even advance for a purchase of … two digits’. In other words, not to spend €10m or more.

The Bundesliga club now want €12m for the German and the interest from Tottenham, West Ham helps them.

Record are of the belief the defender’s signing would be completed for less than €10m in an ideal scenario, and Benfica are confident he wants to join them. 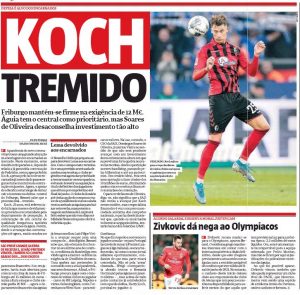 The Primeira Liga side reckon they will have the situation controlled with regards to the player because they have ‘already established contacts’ with his father.

These contacts will mean nothing if Benfica fail to find an agreement with Freiburg and it could open the door for the likes of Spurs, West Ham or another club to swoop in for Koch.