Home Premier League Chelsea “There will be time to talk” – La Liga star quizzed about...
SHARE

Kepa Arrizabalaga’s failure to fully convince Frank Lampard with his performances last season could see Chelsea enter the market for a new goalkeeper.

The Spain international was left on the bench for the crucial fixtures at the end of the season, casting further doubt on his future.

Atlético Madrid star Jan Oblak has been identified, by the media at least, as one of the targets for the west London club.

The Slovenian has a €120m release clause and reports coming out of Spain have suggested the Blues ‘dream’ of signing the La Liga keeper.

Oblak is set to start for Diego Simeone’s side in their Champions League quarter-final clash against RB Leipzig this evening.

AS spoke to the 27-year-old and during the course of the interview, the goalkeeper was asked about the recent reports of ‘strong interest from Chelsea’ in signing him.

Oblak said: “This is not the time for that, now it’s Leipzig’s turn. I do the evaluation of the season when the last game is over and, hopefully, we have three left. Then there will be time to talk. But first, Leipzig. I really want to progress [further in the Champions League].” 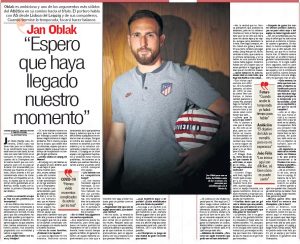 The goalkeeper didn’t completely dismiss Chelsea’s chances, although the money involved would make a transfer very difficult this summer.

Atlético will face Paris Saint-Germain in the last four of the Champions League, if they manage to beat Leipzig.