Home Europe Newcastle could secure signing for €5/6m – Player given time off to...
SHARE

Newcastle United may have manoeuvred themselves towards getting something of a transfer bargain.

When Schalke sent Nabil Bentaleb to the Premier League club on loan in the January window, and he then started to make appearances for the Magpies, the German club thought that would be the last they’d see of the midfielder.

Then when rumours started about Newcastle being taken over by a Saudi consortium, their confidence grew further. It was considered very likely the English club would use their €10m buying option, and sign the 25 year old on a permanent deal.

Well, they didn’t, and now Schalke are left with a player who has less than a year left on his contract, who they don’t really want, and who quite probably doesn’t want to play for them either.

Bentaleb was due back at Schalke on August 12th for preseason training, however, he didn’t show up. Kicker report that’s because the Bundesliga side have given him a few 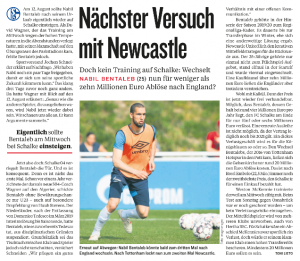 days off so he can ‘sort out his sporting future’.

Kicker suggest Newcastle not using their €10m option was a ‘calculation’, and they could now secure the player for just €5/6m. Bentaleb can be inconsistent and frustrating at times, but €5m sounds like a pretty good deal for the Magpies.