This Sunday, The Daily Mirror had a short story saying three Premier League clubs are in the race for the Porto striker Moussa Marega.

According to their article, Everton, Swansea City and West Ham United are all keen on the 26-year-old, who has already scored 21 goals this season.

The Mirror claimed that although it’s unlikely that Porto can sell the forward for his £35m release clause, the Toffees and the Hammers would be clubs who have the power to pay such amount and take the player.

The Portuguese press has obviously covered that, and it’s quite interesting how they had they had a strong opinion on the current situation. 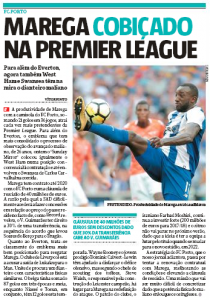 Record has a story today saying it’s Everton who are leading the race, as the club are currently ‘better positioned’ to take Marega from Porto.

The reason for that is because the Toffees have been following the striker since Romelu Lukaku left them for Manchester United, and ‘according to Steve Walsh’, Marega would have a place in the team.

We have no idea where Steve Walsh’s opinion was taken from, even because he’s not quoted in the story, but somehow Record managed to know what he thinks of the signing.

A few days ago, it was the newspaper A Bola who had a big story on Everton and Marega, as they interviewed the player’s agent, who confirmed the club’s interest.

“It’s true there’s been contacts about him from various English clubs, among them Everton, but no decision was taken. And it will only be furthered with the knowledge and consent of FC Porto. Anything else you say more than this will be speculation”, Aziz Ben Aissa told A Bola.

Now although these news stories are very likely to have come from these quotes, it’s interesting to see how this rumour is growing.

Record claims that Porto won’t sell the player for less than his release clause. Because as 30% of the fee is going to his former club Vitória de Guimarães, the Dragons can’t afford dropping his price.

So that’s it, £35m to take Marega from the Portuguese club next summer. And this rumour should have a lot more pages in the local press until something really happens.

In summary, the Portuguese press started claims that Everton, West Ham and Swansea want the player, The Daily Mirror seemingly then covered these claims and presented them as their own, and now it’s all back in Portugal.