Samuel Umtiti speaking to the French media and confirming clubs have shown interest in him has been all the motivation Sport need to carry on the Manchester United rumour.

It’s been the Catalan newspaper pushing Umtiti to Old Trafford more than any other, and they’ve had daily articles on the possibility for at least the past week.

Sport’s take on the French interview is it underlines everything they’ve been saying, that Barcelona should be worried about interest from Manchester United.

With the defender having a €60m release clause he’s reasonably priced and the cost wouldn’t be a problem for Jose Mourinho’s club. The big problem is what Umtiti himself thinks, and whether he’s encouraging the idea of interest just to make Barca pay higher wages. 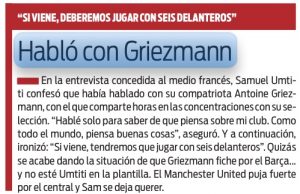 Sport have a snippet on what Umtiti said about Antoine Griezmann during the interview. The Barcelona player said they’ve spoken about the Catalan club, and that leads Sport to suggest Griezmann could be at Barca very soon, but Umtiti not.

Manchester United are said to be ‘bidding strongly’ for the French defender, and this story isn’t going anywhere.