For the past several transfer windows, the Portuguese media have talked up Andreas Samaris leaving Benfica.

Nearly every time the chosen destination is the Premier League, something which would suit both club and player. Samaris is thought to be keen on playing in England, with the big salaries on offer no doubt a temptation, and Benfica believe they’d get the best fee by selling to a Premier League club.

Monday’s edition of A Bola carries a story lining up the midfielder for a summer move, and Southampton are the chosen destination.

Mark Hughes’ club are said to be very interested, and it’s also claimed an approach came from Swansea City in January, suggesting the Welsh club could return. 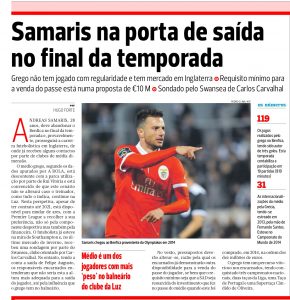 That’s crucial for the Portuguese media, because dragging Swansea in gives them the chance to talk about Carlos Carvalhal, so it’s a story they’ll likely drag on.

As for Southampton, the club do scout often in Portugal so interest is certainly possible. A Bola say the minimum price for Samaris is €10m, which is a lot less than previous claims.