Friday’s edition of A Bola had a big article claiming Everton are keen on signing Moussa Marega from FC Porto.

The Goodison Park club were said to be interested along with Swansea City and West Ham, but Everton had the advantage due to their ‘deeper pockets’.

It now seems there’s more to this rumour than most, with A Bola speaking to the striker’s agent, who confirmed Everton interest and that the Premier League club have been in contact.

Aziz Ben Aissa told the Portuguese newspaper: “It’s true there’s been contacts about him from various English clubs, among them Everton, but no decision was taken. And it will only be furthered with the knowledge and consent of FC Porto. Anything else you say more than this will be speculation.” 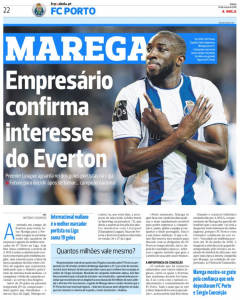 Marega has 20 goals and 5 assists so far this season, after pushing his way into the Porto starting eleven. The 26 year old spent last the last campaign on loan at Vitória Guimarães and a sale last summer seemed quite possible.

It’s fair to say Porto didn’t expect Marega to achieve what he has this season, and if they get a good offer from Everton or elsewhere in the summer then a sale is likely.

The problem is what Porto see as a good offer, and they’ll use his €40m buyout clause as a starting point for negotiations.