For weeks, the Spanish press have repeatedly stated Jules Koundé has an agreement in place with Chelsea and the west London club have to submit an offer to Sevilla to complete his signing.

According to Diario de Sevilla, the La Liga side have not received a proposal from Chelsea so far.

When going into further details, the report says an offer which would encourage Sevilla into talks hasn’t arrived yet.

It’s said ‘there were threats made through different intermediaries’ before Thomas Tuchel’s side opened negotiations with Inter Milan for Romelu Lukaku.

Diario de Sevilla follow it up by stating: ‘Then, always according to those interposed persons and without any official offer, amounts of around 50/55 million euros arrived at Sevilla’.

Chelsea tried to include some of the players as a part of the deal to take the centre-back, but it wasn’t appreciated by the Spanish club, who are demanding at least €70m for the former Bordeaux man.

‘Everything has stopped’ since then and there has been no movements from Chelsea, even though Sevilla hoped an offer would arrive after the Champions League winners raise funds through sales of some of their players. 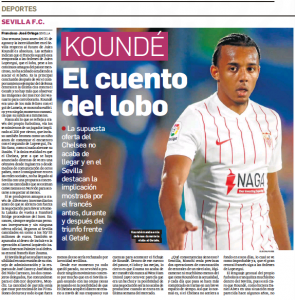 If the Premier League side don’t ‘accelerate fully’ in the coming days, the 22-year-old will continue at Sevilla.

The report adds ‘the signs indicate’ Koundé will play under Julen Lopetegui’s orders beyond the summer transfer window, suggesting the player’s chances of leaving Sevilla for Chelsea are shrinking.

Matheus Nunes had training week with Leicester City – Pieces of...