A match between Benfica and Porto is something that attracts the eyes of the biggest clubs in Europe. The Portuguese rivals faced each other last night, and scouts from Manchester United, Barcelona, Bayern Munich and Juventus were all present in Lisbon.

But there’s also a Championship side who have been following the Portuguese league very closely, and that’s Sheffield Wednesday.

The Owls had already scouted Benfica at this start of season, and now, according to A Bola, they’ve been back to the Estádio da Luz to watch this big match.

The Eagles haven’t been lucky this time, as they were dominated by Porto, with the Dragons going home with a 2-0 win, thanks to goals scored by Zé Luís and Moussa Marega. 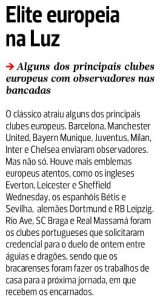 It’s hard to think of who Sheffield Wednesday could be scouting, especially because Benfica’s and Porto’s biggest stars would be unlikely to be moving to the Championship anytime soon.

But the Owls have already proven they can get some deals with Portuguese clubs, so perhaps they have a specific target who they think is possible in an upcoming window.