With Barcelona and Real Madrid both disputing the signing of Neymar from Paris Saint Germain, it’s no surprise to see how the Spanish media have been covering it.

Just as usual, the press from the capital pushes for the Galacticos, while the Catalan media believed a move back to the Camp Nou was more likely.

But something quite different comes up in a story from Mundo Deportivo today, they actually report Barcelona’s pessimism regarding the signing.

According to their sources at the club, the Catalan side now believe PSG will not accept any offer they make for the Brazilian star. 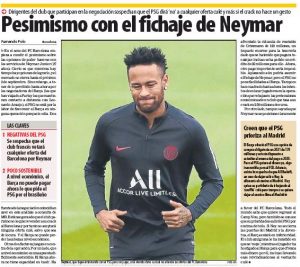 They say Barcelona have tried to sign Neymar on a loan deal with an obligatory buying clause of €170m in 2021. But PSG continue to demand money up front, even though they know Barça can’t afford it now.

The French side, for their own reasons, would be more interested in selling Neymar to Real Madrid. And although Barcelona try to convince the player to go public about his wish to return to the Camp Nou, he’s not doing it, since he knows it could close doors at the Santiago Bernabeu or even in Turin, where Juventus are still interested in the signing.