In its Tuesday edition, the local outlet claims that Estudiantes president Juan Sebastian Verón should be taking a plane today or tomorrow to close the deal in London.

That’s even earlier than what Calcio Mercato said today. According to the Italian website, Verón is supposed to fly on Friday.

Back to El Dia’s claims, the former Manchester United midfielder is expected to seal a sale of over €10m, an amount which will make a huge impact at the Argentine club.

When breaking the Tottenham and Foyth news last Saturday, El Dia had claimed that Verón would be flying to London in the ‘next few hours’. It didn’t happen, and today they report the president has been in meetings to sort out the club’s new stadium.

In yesterday’s update, the newspaper was still pretty sure the Tottenham transfer is 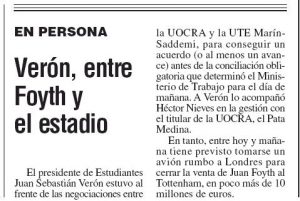 still happening, despite giving no reason why their first information wasn’t spot on.

Still, they stand by it, being the only Argentine newspaper having regular updates.

Mauricio Pochettino and Juan Sebastian Verón go back some way, having played together for Argentina.