Diego Costa leaving Chelsea and joining Atletico Madrid is now a ‘matter of time’, claim Spanish newspaper AS in their Tuesday edition, and they’re quite possibly right. The bigger question is now is how long that time going to be, and how a deal going to be built.

With Vitolo signing a new Sevilla contract, another of Diego Simeone’s targets looks further away, but Costa isn’t going anywhere. Antonio Conte has made it clear to Costa that he doesn’t see a future for the player at Chelsea, and Costa made that public, which won’t have been the course of events the club wanted.

Costa was due back at training this week, and AS suggest that Chelsea saying they’ve 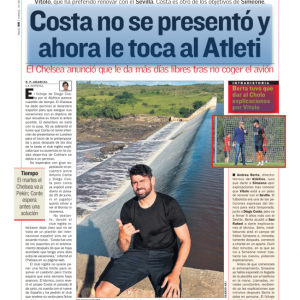 given the player a few more days off could be cover in case he refused to show up anyway.

Something has to give soon, and AS believe progress is expected ‘this week’. Chelsea and Conte will certainly hope so because the club can’t really extend the player’s holidays again, it’s all getting a little awkward.

Any deal with Atletico Madrid will either see Costa not playing until the January window, or going on loan elsewhere between now and then.