William Carvalho saga, chapter 684: the Portuguese press doesn’t have a clue of what will happen to the player, but keeps writing articles about his future every single day.

We all know all these rumours about Premier League clubs wanting the 25-year-old come from Portugal. That’s something that has been happening for years.

But when speaking of Carvalho today, A Bola says he’s ‘been linked in England’ to five different clubs, which would be Arsenal, Manchester City, Newcastle, Tottenham and West Brom. 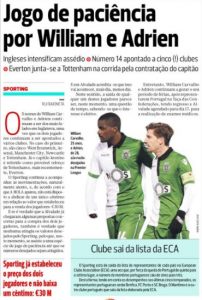 These reports all came originally from Portuguese newspapers, and whilst West Brom seem to be concretely interested, and Tony Pulis has even spoken about it, some of the others are thrown in for drama.

Newcastle United have been added to the ‘race’ recently, and there could be no better reason than them being linked to other players in Portugal.

Anyway, the situation continues to be the same. Sporting wait for bids, and won’t sell Carvalho for less than €30m. A Bola believes this transfer will happen sooner or later, but no one was able to convince the Portuguese club so far.

As the headline says, it’s a patience game. For Sporting, for William, for West Brom, Newcastle, and anyone else the Portuguese press want to drag into it.