On Monday, we covered a story from Tuttosport regarding Moise Kean’s situation at Juventus and the interest being shown in the 19-year-old.

Arsenal were said to have made an offer, which hadn’t convinced the Serie A champions, while Everton ‘remained vigilant’ about the whole thing.

Well, Corriere dello Sport corroborate that information, explaining that Juventus want €40m for their starlet, and, so far, no one has given them a reason to consider his exit.

Their ideal scenario would be to keep the forward, but they know that might not be possible, and so a sale (and hopefully a buy-back clause) could be considered.

It’s stated Everton have been ‘turned away many times’, only offering €30m for Kean so far, while Borussia Dortmund have started to make the ‘first moves’ towards a potential transfer. 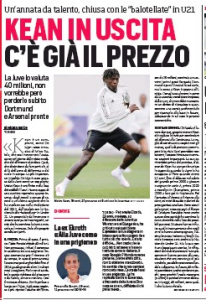 Regarding Arsenal, who appear on the verge of announcing the loan of Dani Ceballos from Real Madrid, the Gunners are ‘serious’ about their interest.

As mentioned above, Corriere explain Juventus would ‘like to keep a buy-back clause or, at least, a “fast-track” to bring him back to the club’.

That means that if they can’t convince the buying club to insert a buy-back clause, some preferential treatment down the line would be appreciated.

The newspaper believe the ‘race for Kean’ has ‘only just started’, suggesting there’s a lot more to come in this, and with both Everton and Arsenal in England and Borussia Dortmund in Germany after him, we could be in for an exiting ride.